Marjorie Ribeiro, aka Marjo Lak, is a Certified Acutonics Practitioner through the West Coast Acutonics School in Berkeley, CA. In her practice she uses a variety of tuning forks, planetary gongs (Quiron, Sedna, Earth and Ohm), crystal bowls, and other sound healing tools, including Tibetan Bowls, bells, rattles and drums to change the vibrations of one’s body, mind, and spirit to invoke what we know as sound healing. Marjo has been focusing her practice on Kids and Women’s Pre-natal and post-partum care, and is Co-Founder of Kids Open Door Clinic with Cristina America, local Acupuncturist and herbalist.
Marjo began her studies in Traditional Chinese Medicine in Brazil. She continued her education in India, where she was introduced to Ayruveda and Tibetan Acupuncture. In 2006, Marjo moved to Humboldt County, and studied with Paul Pitchford at Heartwood Institute, and in 2013, she continued her studies in Energy Medicine and Polarity with Bruce Burger, founder of Heartwood. In 2016, Marjo obtained her Certification in Acutonics through the Acutonics Institute of Integrative Medicine 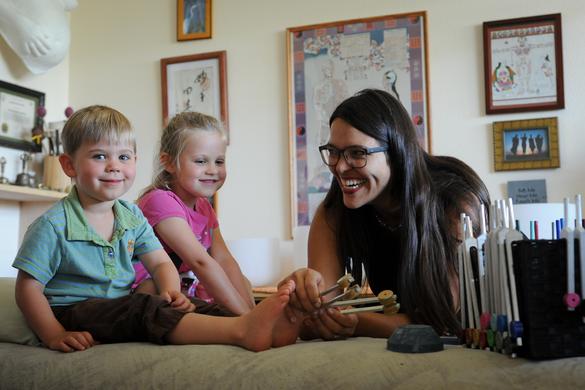